“In the home school the children should be taught how to perform the practical duties of everyday life. While they are still young, the mother should give them some simple task to do each day. It will take longer for her to teach them how than it would to do it herself, but let her remember that she is to lay for their character building the foundation of helpfulness. Let her remember that the home is a school in which she is the head teacher. It is hers to teach her children how to perform the duties of the household quickly and skillfully. As early in life as possible they should be trained to share the burdens of the home. From childhood boys and girls should be taught to bear heavier and still heavier burdens, intelligently helping in the work of the family firm.“

Counsels to Parents, Teachers, and Students, 122. 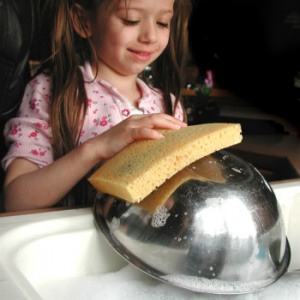 This  parent-teacher conference was to discuss a particular young man who sullenly dragged himself into class each day as if it were a terrible inconvenience.  Every day he sat in his desk without opening a book or lifting a pencil.   As was her custom, the school counselor started the meeting by asking the mother to share about the young man daily life at home.   The counselor asked if the young man had any chores or work responsibilities at home.  No, the mother responded, he was not expected to do any chores at home.  Not even take out the trash?  The mother responded that she took out the trash, and did not ask him to do anything in the way of work around the home.  With that response, the school counselor stood up, declared that the conference was over and that  all of the teachers could leave the meeting.    Incredulous,  the mother asked why.  I’ll never forget the counselor’s response:

“If you have never taught him to work at home,

how do you expect that we will get him to work at school?”

Of all of the parent conferences I attended in my years as a classroom teacher, that particular conference will forever stand out in my mind.   The look on the poor mother’s face as she realized her mistake!  Thankfully, the counselor sat back down to discuss with the stricken mother ways to begin to solve the problem.   As I left that conference, I was convicted anew of  the eternal  importance of teaching children the value of work.   Now, as parent-teacher to my own children, teaching habits of industry is a vital part of my True Education goals.

“Parents cannot commit a greater sin than to neglect their God-given responsibilities in leaving their children with nothing to do; for these children will soon learn to love idleness and grow up to be shiftless, useless men and women. When they become old enough to earn their living and are taken into employment, they will work in a lazy, droning way and will think they will be paid just the same if they idle away their time, as if they did faithful work. There is every difference between this class of worker and the one who realizes that he must be a faithful steward. In whatever line of work they engage, the youth should be “diligent in business, fervent in spirit, serving the Lord”; for he that is unfaithful in that which is least is unfaithful also in much.”

Welcome to the AHE blog!
We hope you will visit regularly to learn more about the principles of True Education, and enjoy
fun links, advice and ideas to make your homeschooling days a blessing to your family.